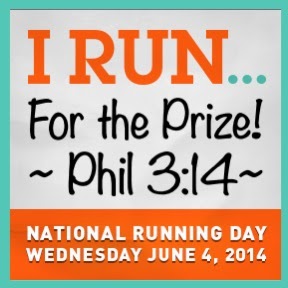 I press toward the mark for the prize of the high calling of God in Christ Jesus. Phil 3:14

Running. It is either loved or despised. And sometimes both. At the same time. Four or five years ago, if you told me that I would run, on purpose, and not because someone was chasing me, I would have told you to check your meds. When I began trying to shed some weight, I could not dedicate enough time to walking in order for it to begin to rev my metabolism. Since I was a teenager I often used at home workout videos, but that was not doing it for me either. It seemed like everywhere I turned, someone was talking about running, or using a couch-to-5k program to get started. I read where people who were much bigger body frame than myself were getting out there and trying to run. Out of nowhere it was like something inside me said, "Tasha, you are going to conquer this thing you said you would never do."

You may have read a previous post about this, so just humor me. When I set out to do the first day of the couch-2-5k training, it appeared that I would almost die for lack of oxygen. However, I survived. It was during a time of personal/family economical struggle, which threatened to crush me emotionally. Every time I laced up my shoes, it was like I was slapping my situation in the face. "You cannot beat me," was my heart's cry. I would literally pray during the run intervals that God would lengthen my endurance, no matter what the trial was, that I would be able to persevere and come out on the other end. Those very prayers are what kept me from stopping my run intervals before the timer dinged. It was a test of my physical and emotional ability. Rev. Joe Hanthorn said, " Faith is not faith until you have had a good chance to quit." Running was my opportunity to build my faith. In God's strength and in my own.

24Know ye not that they which run in a race run all, but one receiveth the prize? So run, that ye may obtain.
25And every man that striveth for the mastery is temperate in all things. Now they do it to obtain a corruptible crown; but we an incorruptible.
26I therefore so run, not as uncertainly; so fight I, not as one that beateth the air:
27But I keep under my body, and bring it into subjection: lest that by any means, when I have preached to others, I myself should be a castaway.

Everytime I ran a little further, I felt weakness leave my body. Physical and emotional weakness. It was bringing my unruly, spoiled, don't-like-to-be-uncomfortable flesh back in check. Life is hard, but we, powered by the Spirit of God, are equipped to be stronger than we ever thought we could be.

And running made me a stronger person.

What will you conquer today, on this National Running Day?

The Brick House | Promote Your Page Too